By: admin
In: Entertainment 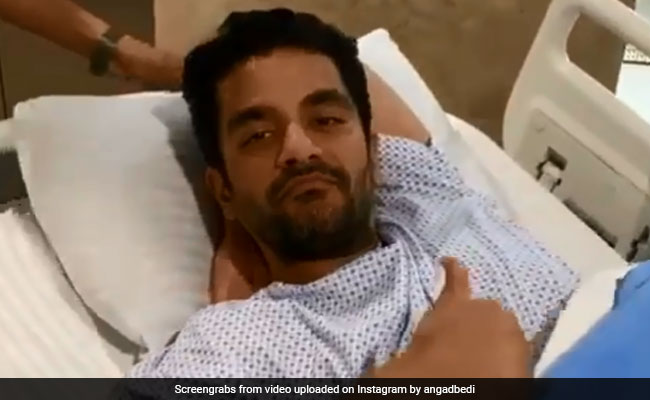 Actor Angad Bedi got injured last month while shooting for his upcoming web-series MumBhai in Mumbai’s Mazagon Dock area. Last weekend, he was in Jaisalmer with wife, actress Neha Dhupia, for Arvind Dubash’s birthday party. After returning to Mumbai with her recently, he underwent a knee surgery on Wednesday in a Mumbai hospital. Angad Bedi shared a video recorded by Neha in the hospital “minutes before the surgery” as he rested on a hospital gurney. In the video, the actress can be heard asking Angad, “How are you feeling?” Angad replied with an “All set!” and flexes his biceps and triceps. Jokingly, Neha said, “But it’s not your triceps, it’s the knee.”

The 39-year-old actress also lovingly asked “What’s your order after you come out? What do you want to eat?” Angad replied: “I’ve been starving for almost 8 hours.” Neha said, “That’s the longest you’ve gone without a meal.”

Angad also said he’s going to come out “fitter, stronger, faster and more dangerous,” after which Neha softly touched his knee and said: “Get well soon.”

The 37-year-old actor posted the video on Instagram and wrote, “That’s me minutes before going in for a knee surgery. I think my nerves got me talking too much. Captured by my wifey (also please note she has no clue which knee is injured) but I still love her too much. Stay tuned for more. Will keep you posted with more videos if I’m not dying in pain.” He also hashtagged the video with: “#AngadsKneedy” and “#Vlog1”.

Take a look at Angad, “minutes before” his surgery:

MumBhai is an ALTBalaji web show. Angad Bedi features in it as a cop named Bhaskar Shetty. He reportedly “miscalculated his steps” while shooting a chase scene, stated an IANS report. A source was quoted as saying by the news agency: “While doing the scene, he miscalculated the step and landed straight on his knee, putting undue pressure. The scene was put to a momentary halt as the production team called for an onset doctor. There was swelling and he was given an ice pack. As the permission to shoot at the docks is given only for a few days, missing even one day could delay the schedule. He mustered energy and went on with the shoot.”

In the interview with IANS, Angad Bedi said, “I am recuperating well and have sought medical help. Because of my sports background, I know how to overcome wear and tear and how to temporarily fix injuries on the spot. I knew how important the scene was, and we were shooting at the location, so we went ahead with it.”

The narrative of MumBhai is about friendship between a cop and a gangster.